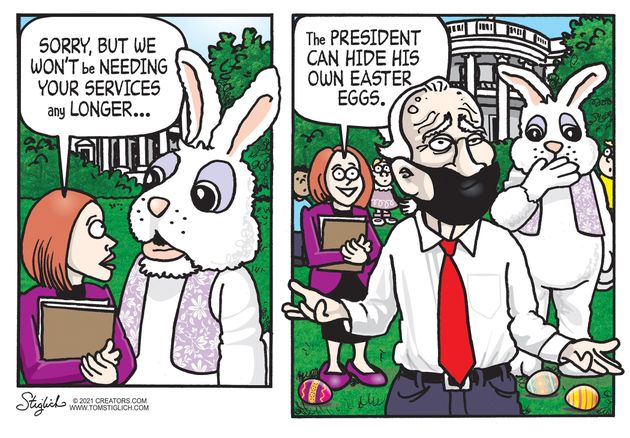 Seems like a marketing ploy for him, but that is just my opinion.
Top

More than 50% approve of Xiden.
Top

Xiden reduced to tears during the campaign over his son’s addiction.

I think you know a lot about a person from their children.

Apparently the 2 trillion infrastructure bill is to help get you out of your car and into buses and trains.

Xiden is just busy busy busy. Lifts sanctions on International Criminal Court so the can continue their work hunting out war criminals in our military.
Top

Executive action on guns due Thursday.

Article talks about safe storage being in there.
Top

Today is the big gun day for Xiden.
Top


"Border officials encountered 172,000 migrants at the border in March, a 71% increase from February and the latest indicator of the extent of the crisis at the southern border -- but one that Biden officials are trying to blame on the Trump administration.

"Of the 172,000 migrants encountered, the majority were single adults, and included 18,890 unaccompanied children -- a 100% increase from the already high numbers encountered in February, and the highest number recorded. In February, 100,441 migrants overall were encountered."

Come on, man! 272,441 people is almost the entire population of Brownsville, Texas; and more than Pasadena, McAllen, Mesquite, Waco, Abilene, Sugar Land, and on and on.

272,441 border crossings--that we know of because they got caught--in two months? Come on, man!
“Be ready; now is the beginning of happenings.”
― Robert E. Howard, Swords of Shahrazar
Top

Give them hotel rooms.

So surprise, surprise. The 86 million dollar contract to house illegals in hotel room was a no bid contract, no bid contracts are only allowed in "Emergencies", which of course this is not. So the outfit, a non profit corporation where the officers make as much as 310k a year, that got the big contract, is only a 42 million dollar a year company and its largest government contract before that was 1.4 million.

Would it make sense that they have a new hire. A guy who worked on Xiden's transition team. Only took him 2 months to land a big contract.

"Lorenzen-Strait also had a rather significant position on the Biden-Harris transition team – he was on the DHS policy team, where he vetted political appointees for the Department of Health and Human Services, which oversees the care that unaccompanied migrant children are provided while in government custody. When he worked for ICE, his immediate boss was Tae Johnson, who is now the acting director of ICE and would have had the final say on the $87 million contract."
Top
Post Reply
799 posts