Reports of actual crimes and investigations, not hypothetical situations.

I just read this. This is getting really scary with attacks on LEOs.
Fortunately the officer recovered and was not seriously injured and will recover.
Apparently the dose was very high and the officer was impaired very quickly.
They arrested an 18 year old suspect and have video evidence.

Tanis Ukena, 18, is in custody at the Davis County jail on suspicion of Surreptitious Administering of Poisonous Substance.
According to a narrative by Layton Police Detective Kelly Rushton, Ukena was working at a Subway when a police sergeant
in a marked police cruiser ordered a sandwich and drink at the drive-thru.

I hope the book is thrown at this criminal.

Poisoning our LEO's should be a capital offense.
Top

Just look at the picture of this punk! He's not scared or worried, he's mad that he got caught!!!! 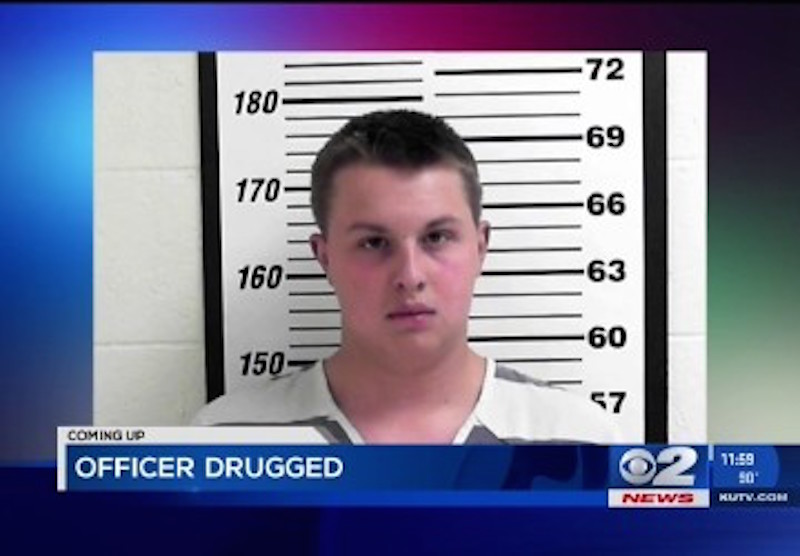 • Give me Liberty or I'll get up and get it myself.
• I don't carry because of the odds, I carry because of the stakes.
• My dream is to have lived my life so well that future generations of leftists will demand my name be removed from buildings.
• Independent Minarchist.
Top

Little pile of human waste. Looks like your typical spoiled brat in need of some good ol' fashioned whoopin'.

By the way, if possible, I'd add assault on the public servant to the charge.
Credendo Vides
Top

All of these incidents are the responsibility of the Obama administration, the BLM movement and everyone else advocating violence against LEO's.
The left lies about everything. Truth is a liberal value, and truth is a conservative value, but it has never been a left-wing value. People on the left say whatever advances their immediate agenda. Power is their moral lodestar; therefore, truth is always subservient to it. - Dennis Prager
Top

That is a scary incident. I think I'd rather be assaulted straight up than be dosed w. a heavy hit of meth :-/
I'll quit carrying a gun when they make murder and armed robbery illegal

From the article: "The officer was hospitalized but has since been released. He has not yet returned to duty. Ukena is being held on $10,000 bail.

What?? ONLY $10,000 bail who poisoned a police officer?? They should charge him with attempted capital murder(if they have that in Utah)!

Diplomacy is the Art of Letting Someone Have Your Way
TSRA
Colt Gov't Model .380
Top

If I were a LEO I would never eat at a restaurant while in uniform.
“In the world of lies, truth-telling is a hanging offense"
~Unknown
Top

parabelum wrote:Little pile of human waste. Looks like your typical spoiled brat in need of some good ol' fashioned whoopin'.

By the way, if possible, I'd add assault on the public servant to the charge.

I would say attempted murder.
“Be ashamed to die until you have won some victory for humanity.”
― Horace Mann
Top

Was he fired?
Top

I sure hope so. I won't eat at a place that would not fire an employee who did something like that.
“Be ashamed to die until you have won some victory for humanity.”
― Horace Mann
Top

How did this clown ever hope to get away with something like that. Most likely, some smooth talking lawyer will get him off with a slap on the wrist.

I hope this doesn't become a trend. I got notice seeking contributions for an officer who almost died from intestinal bleeding after he ingested a piece of metal that was in his food. There was no tie to someone doing it on purpose but there was enough to read between the lines. I couldn't find the link. now.
KAHR PM40/Hoffner IWB and S&W Mod 60/ Galco IWB
NRA Endowment Member, TSRA Life Member,100 Club Life Member,TFC Member
My Faith, My Gun and My Constitution: I cling to all three!
Top

Jim Beaux wrote:If I were a LEO I would never eat at a restaurant while in uniform.

That would be one way of avoiding what happened in the incident described.

Alternatively, if the officer had ordered his lunch inside the Subway restaurant, he could have observed the food being prepared and filled his beverage container himself, thereby giving Ukena far less opportunity to tamper with the food and drink.

Furthermore, I do not expect uniformed police officers to be the only potential targets for food service employees tampering with food/drink; people wearing clothing or driving cars with bumper stickers with political messages, or someone simply open carrying, might get more than what they ordered from a food service worker with a criminal recipe.
Top

I got so angry reading this story that I had to go chew up a bunch of Tums.

Why the heck did a fast food worker have Meth while he was on the job? Don't they drug screen those people now days? I'm not for lawsuit abuse, but if I were a lawyer I would take a case to sue the employee, the store owner, and Subway.
Do what you say you're gonna do.
Top
Post Reply
30 posts

Return to “The Crime Blotter”