I'll give you my one stay-away from recommendation and I'll tell you what I have used successfully.
First, stay away from the Lee pro-1000. Don't waste your money, time, and effort on that junk.

The first press I used was a Lee Classic Turret, good press and it is still in use by a friend. I got away from it because it was a jack of all trades and master of none. As a starter press you can do far worse, much much worse. I have no trouble recommending it to someone else.

The second press I got was an RCBS Rock Chucker. It is still on my bench and still loads ammo I want to be a "hand loader" with. That means it is where I load most of my rifle, .45 Colt, and .44 mag loads. These are precision loads in my case and are done with a very time consuming process.

The third press I got was a Hornady LnL AP. This is where I go when I want to simply manufacture ammo relatively quickly. I typically load three to five hundred rounds in a session with complete inspection and clean up between 100 round lots. I limit my lots to 100 rounds because that is what the primer tube handles. I have learned that if I inspect and clean up when I stop for primers I tend to get have fewer issues across the board.

As far as dies go I use more RCBS dies than any other brand, followed by Lee. When I want really accurate ammo I go with Redding dies, but for the most part my die sets tend to be a mixed bag with dies from two or more manufacturers. I tend to hunt dies at gun shows as I can usually find real good deals there and when it comes to RCBS dies I have no fear of buying those dies used as RCBS will repair or replace their dies that are damaged.

Regardless of the press, die, or other tool, I tend to spend more time on maintenance than actually making ammo. While this is not required it is simply my nature, just as I spend more time on maintenance of my firearms than I actually do shooting them.
How do you explain a dog named Sauer without first telling the story of a Puppy named Sig?
R.I.P. Sig, 08/21/2019 - 11/18/2019
Top

Boxerrider wrote:
I have Lee's Classic Turret and believe it is a great place to start.

Have you had issues with the auto-indexing? I've been reading about that some lately but I'm not clear for which Lee turret that seems to be happening.


Four stations is as many as I've ever wanted to use - I like seating and crimping revolver rounds in separate steps.

Do you crimp with the Lee factory crimp die? Choosing a press seems to be just the start of the adventure. Die selection will probably have me tied up for a while too.

Whatever you choose, get at it - you're missing out on the fun!
Jeff

I am getting there. I just bought an AR and enough ammo to keep me shooting for a while so I'm scraping my pennies together. I just built my workbench in the garage and I will put in some shelving this weekend. It's been fun just planning this all out and seeing it come together. A nice break from pounding away on a keyboard all day for work.

Thanks for the advice. For the money, the Lee Turret does seem to be taking the lead. The Kempf kit seems to be a good way to go to get started:

Do you use the auto disk or auto drum powder measure?

I have not had any issues with the auto-indexing, although I can see why some people do. The turret is rotated by a square rod with a twist in it. The rod runs through a plastic housing that clamps to the ram, and floating inside of that housing is a square plastic ring (ratchet on Lee's parts list). If you short-stroke the press (change directions while that ratchet is in contact with the twisted part of the rod) the ratchet will bind. If you force it, then the ratchet will strip and the press will not auto-index until you replace it ($0.50).

I use Lee dies, and for some calibers, their factory crimp die. I have been happy with it for handgun rounds, and really like it for rifle rounds. Even though they are both called "factory crimp die", the method is completely different.
In most die sets, the bullet-seating die both seats the bullet and crimps the case mouth. The crimp is adjusted by screwing the die body in or out, and the bullet depth is adjusted by screwing top knob in or out. By using separate dies, I am able to adjust the crimp without changing the bullet depth.

I use the auto-disk powder measure and like it a lot. There are some powders it doesn't play well with, but I think that is universal. For rifles I use a separate measure off of the press to throw low charges, then go to the scale and trickle up to what I want. It's slow, but those are low volume and I don't mind. You've probably read that some folks handload so they can shoot and some folks shoot so they can handload - I'm somewhere between those.

I just got an AR and don't load for it yet. When I do I'll seek a powder that will allow me to do the whole operation on the press.

The Kempf kit looks like a pretty good way to go - not a bunch of stuff you either won't use or will immediately replace. I bought accessories piecemeal, as I could afford and/or found good used deals on them.

Circling back around to this a little over a year later and I have this kit on its way: 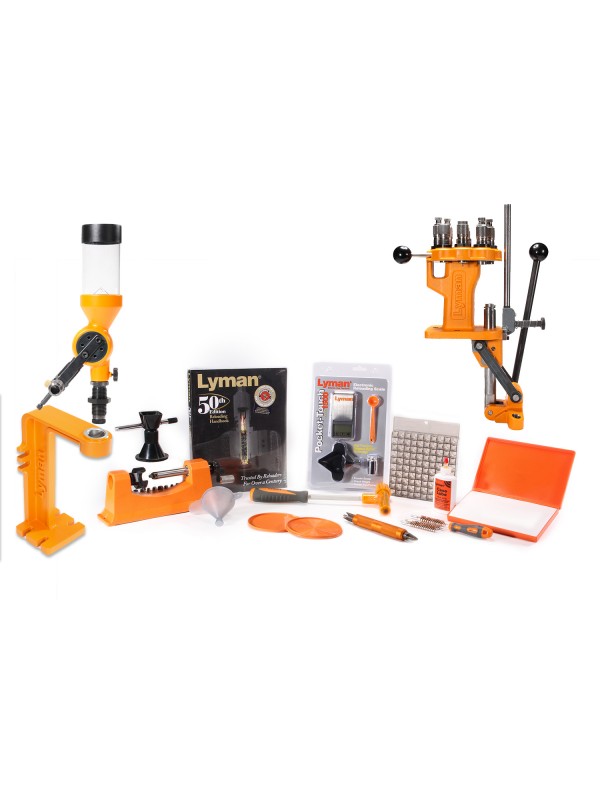 It took a while but I am finally getting going. First order of business will be to finish setting up the lighting in my garage and then dive into the Lyman manual.
Psalm 91:2
Top

It took a while but I am finally getting going. First order of business will be to finish setting up the lighting in my garage and then dive into the Lyman manual.

Souds like a good plan to get started... read a lot, ask a lot and always verify the scale before each loading session!
Top

Absolutely. I have a set of check weights on my to buy list.
Psalm 91:2
Top

Thanks for the follow-up post, and happy to hear you are making progress.
I started picking up and cleaning, even de-priming, my brass a year before I started reloading.
Also started buying tools (tumbler, scale, dies) and primers long before I made up my mind on a press.
That was ten years ago, give or take.

I actually have a Rock Chucker, picked up cheap and only used for occasional depriming and priming and a few loads. Was going to offer to loan it to you until you found which way you wanted to go.

Was going to offer to loan it to you until you found which way you wanted to go.

That's very generous of you, thank you! I think I am set for now.
Psalm 91:2
Top

I use a single stage RCBS for my rifle rounds and a Lee 4 hole turret for pistol. Not too expensive to start and as others have said unless your loading several hundred round a day should keep you in ammo.
Top

A couple things I learned:

I've become a believer in getting a separate die to crimp, and crimping and seating in separate steps. Especially with .45 Auto or any autoloading pistol cartridge, and ESPECIALLY if you are loading lead bullets. I'd also err on the side of over-expanding the case mouth with lead. I have a bunch of hard cast loads that won't fully chamber either because lead was squeezed over the brass in crimping or because the case shaved brass and lube when seating.

With roll-crimped cartridges, .38/.357 and .45-70, I've ended up with a lot of buckled brass from over-crimping jacketed bullets. You really do need a much lighter crimp with jacketed bullets (that's usually where I've had my problems).

.30-06 has been the easiest, probably because it's the last one I started reloading. The first powders I bought were IMR 4064 to H4895, and I learned I much prefer 4064, particularly in 168 grain. In addition to 168 grain BTHP from Hornady and Sierra, I've been loading Hornady 150 grain SSTs as a potential deer load, and they work great with an M2-size powder charge even though the cannelure is well north of the case mouth when I load to the M2 OAL. I bought a bulk order of the Prvi Partizan "For Rifle M1 Garand" stuff, and have been happy with the brass (and with the ammo itself, for that matter).
Top
Post Reply
24 posts