This section is for recommendations, reviews & questions.

If you're looking for a good novel and, like me, enjoy well-written, realistic military/espionage fiction (not always an easy combination to find; it's usually one or the other), I recommend a look at Red Metal. Available at Amazon.com in hardcover (656 pages, $20.76), paperback ($7.48), as a Kindle eBook, ($9.99), and should be available just about "anywhere books are sold"...it's still fairly new.

First published in July 2019, it was the author duo that intrigued me when I found it. The wordsmith is Mark Greaney, who first became a bestselling author with his Gray Man series in 2009, and has authored or coauthored seven Tom Clancy novels, three of those in collaboration with Clancy himself before we lost Tom in 2013. Greaney's bio states, "he has traveled to dozens of countries, visited the Pentagon, military bases, and many Washington, D.C. Intelligence agencies, and trained alongside military and law enforcement in the use of firearms, battlefield medicine, and close-range combative tactics." His previous books indicate he really does know the difference between a clip and a magazine, but the subject matter expert and coauthor for this book was even more Interesting.

USMC Lieutenant Colonel Hunter Ripley "Rip" Rawlings IV is still active duty, and is the real deal. His marines.mil profile is here. He joined the Marine Corps in 1996. His first deployment to the sandbox was in March 2006, when then Captain Rawlings reported to 3d LAR Battalion as the Commander, Company D, the "Dragoons." He's been stationed and had commands in Al Anbar, Ramadi, Kandahar, and Helmand among several other Middle East war zones. He was in the desert for over four years then, promoted to Lt. Colonel, he was assigned as a Strategic and Operational Planner for the Pacific Theater and the Marine Corps Campaign Planner in 2012.

So this novel had a seasoned military thriller writer teaming up with a very seasoned USMC officer. I hoped the collaboration would be a good one, and it didn't disappoint.

Red Metal is set in the near-future where, several years after the Russians lose control of a strategically high-value rare-earth mine in Africa, the Russian Colonel previously in charge of the mine hatches a plan to simultaneously launch one raid into Europe to cripple America’s Africa Command in Stuttgart and another raid into Kenya to retake the mine. The Russian president and prime minister approve of the plan and operation Red Metal is a go.


Amazon.com summary wrote: Ranged against the Russian attack are a Marine lieutenant colonel pulled out of a cushy job at the Pentagon and thrown into the fray, a French Special Forces captain and his intelligence operative father, a young Polish female partisan fighter, an A-10 Warthog pilot, and the captain of an American tank platoon who, along with a German sergeant, struggle to keep a small group of American and German tanks in the fight.

Publishers Weekly review wrote: The various battles--fought on land, sea, and in the air--are exciting, realistic, and technically detailed... As in the best of this genre, there are no cartoon villains, just dedicated warriors who are given a mission and are determined to carry it out. This is powerful material, required reading for anyone interested in modern warfare. 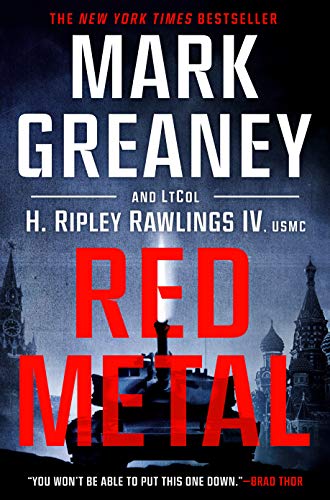 “Be ready; now is the beginning of happenings.”
― Robert E. Howard, Swords of Shahrazar
Top

Just bought it with my Barnes & Noble Nook account. I'll download it in a few minutes. Looking forward to reading it.

Thanks for the info!

Thanks for the recommendation Rafe!

Just ordered it from Walmart. Thanks for the recommendation.
Top

Hope you enjoy it!
“Be ready; now is the beginning of happenings.”
― Robert E. Howard, Swords of Shahrazar
Top
Post Reply
5 posts • Page 1 of 1